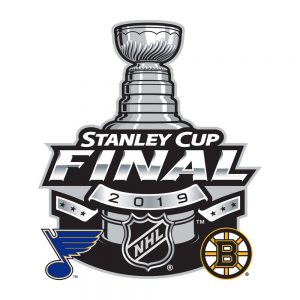 Blues @ Bruins Free Pick & Odds Game 1 – 2019 Stanley Cup Finals Betting! The St Louis Blues and Boston Bruins battle in Game 1 of the 2019 Stanley Cup Finals tonight. The odds makers at Bovada Sportsbook have the Bruins currently posted as a -160 moneyline home favorite tonight. The betting total is posted on the board at over/under 5 goals. Tip off is set for 8:08 PM EST from inside the TD Garden in Boston, Massachusetts. Tonight’s game can be seen on NBC.

Keep reading below for our Blues @ Bruins free pick today from World Champion Handicapper Sonny LaFouchi(aka The LEGEND). Be sure to check out NSAwins.com daily for the best premium sports picks offered anywhere in the industry. We are the site to turn to for the best free NHL picks these 2019 Stanley Cup Finals. BAR NONE!

The Bruins are looking to win the 7th Stanley Cup trophy in franchise history and their first since the 2010-2011 season. Boston beat Toronto 4-3, Columbus 4-2 and Carolina 4-0 to reach their 3rd Stanley Cup Finals this decade. The Bruins are on a 7 game winning streak as they haven’t lost since Game 3 of the Columbus series on April 30th.

Our money is going down on the Bruins -160 tonight. Boston is the better team and they are dominant at home. The Bruins haven’t lost in 7 games and have simply been a force. St Louis is a formidable opponent but tonight’s game has Boston written all over it. St Louis will have an opportunity to steal one in Boston but tonight is not the game.

Get all of today’s NHL odds from 6 top online & vegas sportsbooks.