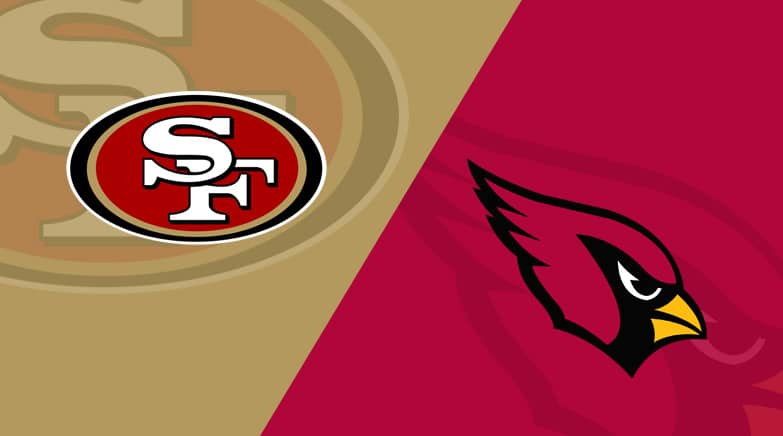 The San Francisco 49ers travel to the desert to battle the Arizona Cardinals in Week 5 NFL action on Sunday, October 10th. The odds makers at Bovada Sportsbook have the Cardinals listed as -5 point favorites on Sunday from State Farm Stadium in Glendale, AZ. Kickoff is set for 4:25 PM EST. The total is listed at over/under 49 points.

Keep reading below for our free 49ers @ Cardinals pick on this AFC West matchup from World Champion Handicapper Sonny LaFouchi(aka The LEGEND). Be sure to check out NSAwins.com daily for the best premium NFL picks offered anywhere in the industry. We are the site to turn to for the best NFL picks all the way thru the 2022 Super Bowl. BAR NONE!

The Arizona Cardinals enter this game this game 4-0 overall and are 1-0 at home this season. Arizona is 3-1 against the spread and 2-2 on over/under odds this season.

San Francisco is looking to snap a 2 game losing streak and pick up a much needed win if they want to stay competitive for the NFC West Division title this season. The 49ers opened with two wins at the Lions and at Eagles but dropped their last two games at home to the Packers and Seahawks.

Quarterback Jimmy Garoppolo is questionable to start this week with a calf injury. Is this guy always hurt or what? It’s unbelievable. The 49ers had better hope he can play and play well because we just can’t see the rookie Trey Lance being able to lead the 49ers to a road win against arguably the best team in the NFL right now in his first career start.

Arizona is off to a great start. The Cardinals are now 4-0 after manhandling the Rams 37-20 last Sunday in Los Angeles. The win snapped a 8 game skid against the Rams and puts the Cardinals atop the NFC West Division and the only undefeated team left in the NFL.

Quarterback Kyler Murray is having a great season so far and should be in the running for MVP all season if he keeps it up. Murray is completing 76.1 percent of his passes, 1273 passing yards and has 9 passing touchdowns to 4 interceptions. Murray also has 3 rushing touchdowns this season to boot.

Under is 4-0 in 49ers last 4 games after accumulating more than 250 yards passing in their previous game.

49ers are 0-5 ATS in their last 5 games after accumulating more than 350 total yards in their previous game.

Under is 5-1 in 49ers last 6 games following a straight up loss.

Cardinals are 4-0 ATS in their last 4 games in October.

Under is 7-1 in Cardinals last 8 games after allowing more than 250 yards passing in their previous game.

Over is 5-1 in Cardinals last 6 games following a ATS win.

Over is 5-1 in Cardinals last 6 games on grass.

The LEGEND’s Free Pick: Bet on UNDER 49. The 49ers defense will step up and do their part to keep this one from getting out of hand. San Francisco can’t win a shootout and has to keep this from getting into a track meet in order to have a shot at the win. Meanwhile, Arizona’s defense should have the upper hand against either Garoppolo or Lance. BET IT @ BOVADA!