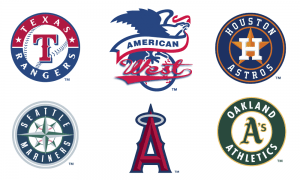 Keep reading below for the 2019 AL West Division predictions this baseball season from NSAwins.com top handicapper, Sonny LaFouchi(aka The LEGEND). If you are interested The LEGEND’s best MLB plays this season than visit our MLB picks page. Everyday during the 2019 MLB season we will have The LEGEND’s best MLB picks to bet on listed on that page. Check it out regularly as The LEGEND simply DOMINATED MLB Baseball like no other in the industry. BAR NONE!

The Astros finished 103-59 last season and appeared to be the favorite to capture what would have been back-to-back World Series titles. However, things changed quick in the postseason as they ran into the Boston Red Sox and were quickly ousted and outclassed. The Astros will be back in the hunt in 2019 as they still have arguably the best combination of bats and pitchers in the game. Houston’s lineup is scary and the top of the order with George Springer, Jose Altuve, Alex Bregman and Carlos Correa is the best in the business. The pitching staff led the majors in ERA last season and will once again be formidable with Justin Verlander and Gerrit Cole leading the rotation and Roberto Osuna closing.

The Angels finished 80-82 last season to finish under .500 for the 3rd straight season. Enough was enough for the Angels management as they decided to part ways with manager Mike Sciosa. Brad Ausmus is the new Angels manager and the former Tigers skipper has a chance to get the Angels back in the postseason. Los Angeles still has the best overall player in the game in our opinion with Mike Trout in center field. The 7x All Star and 2x AL MVP had another great season last year when he batted .312 with 39 home runs, 79 RBI and 24 stolen bags. Trout is amazing and is itching to get the Angels back into the postseason. The Angels will need the pitching staff to kick it up a notch from the unit that finished just 19th in the bigs last year in ERA. They are still a big question mark but do have some talent to make it happen.

The Athletics surprised many last season as they finished 97-65 overall won 22 more games than they did in 2017. Oakland manager Bob Melvin did a helluva job last season but it’s going to be awfully hard to duplicate this season. The A’s have some talent but nowhere near the talent that one would expect from a 97 win team. Smoke and mirrors? Well, we won’t disrespect them like that but they did catch a lot of luck last season and snuck up on people. Oakland finished 4th in the majors in runs scored and their pitching staff was 11th in the bigs in ERA last year. It will be hard for them to match what they did offensively again as it’s hard to imagine Khris Davis blasting 48 home runs and finishing with 123 RBI’s while only hitting .247 like he did last season. There’s no shame in dropping off from that as that was a career year for almost every MLB player. Oakland will be good but not 97 wins good.

The White Sox have been on the decline for 3 seasons now. They have gone from 78 wins in 2016 to 67 in 2017 and 62 in 2018. Chicago simply isn’t a good team and it’s hard to see them winning 70 or more games this season. They have a bottom tier offense to go with one of the worst pitching staffs in the bigs. It’s going to be another long year on the South side.

The Rangers have been on a steady decline since winning 95 games in 2016. Texas dropped to 78-84 in 2017 and came back last season and finished 67-95. The Rangers have a lot of holes and it’s going to be another long season in 2019 for their fans. Texas had the league’s 28th ranked pitching staff in ERA last season and a middle of the road offense that finished 14th in runs scored and 23rd in batting average. Don’t expect much better results in 2019.

One would expect a team that finished 89-73 last season to be in the hunt for the playoffs the next season. Certainly that team wouldn’t be the favorite to finish dead last in their division. However, here we are with the Seattle Mariners as their trade happy GM Jerry Dipoto decided to blow it up and trade some of his best pieces in the offseason. The guy traded Robison Cano, Jean Segura and Edwin Jackson from last year’s club and failed to upgrade at any of those positions. Whattya doing Jerry? We don’t get it. Look for the Mariners to have a big drop off this season and finish in the basement.