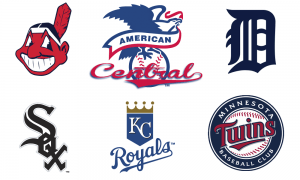 Keep reading below for the projected order of finish in the AL Central Division this 2019 MLB season from NSAwins.com top handicapper, Sonny LaFouchi(aka The LEGEND). If you are looking for The LEGEND’s best MLB picks this season than visit our MLB picks page. Everyday during the 2019 MLB season we will have The LEGEND’s best MLB picks to bet on listed on that page. Check it out regularly as The LEGEND simply DOMINATED MLB Baseball like no other in the industry. BAR NONE!

The Indians won the AL Central for the 3rd year in a row last year despite dropping from 102 wins in 2017 to 91 in 2018. However, there is no reason to think the Indians won’t win the division again this season. Cleveland finished 2nd in the majors in team batting average last season at .259, 3rd in runs with 818 and 6th in home runs with 216. The offense is potent and they have a very good pitching staff to help them out. Cleveland’s staff finished 9th in the majors in ERA at 3.77 last year and have one of the top trio of frontline starters in the big. Corey Kluber, Trevor Bauer and Carlos Carrasco make up a very good top of of the rotation and if they stay healthy then we expect Cleveland to win 95 plus games this season.

The Twins finished just 78-81 last season after building momentum in 2017 when they finished 85-77. Minnesota was expecting more from last season but failed to come thru. However, it’s a new year and with it comes hope of bigger things and the Twins will have a new face on the bench to lead them. Rocco Baldelli was brought in from the Tampa bay organization to become the new Twins manager and he replaces Paul Molitor. Baldelli needs to get more from the Twins pitching staff that finished just 22nd in ERA last year at 4.50. Projected opening day starter Jose Berrios is just 24 years old and has been developing nicely the last few years. He is due for a breakout season in our eyes this season and can lift Minnesota back to 85 wins plus if he can put it all together and win 18 plus. The Twins offense is mediocre but isn’t woeful. All in all, Minnesota could find themselves in the hunt for a Wild Card spot if they start off hot and keep building.

The White Sox have been on the decline for 3 seasons now. They have gone from 78 wins in 2016 to 67 in 2017 and 62 in 2018. Chicago simply isn’t a good team and it’s hard to see them winning 70 or more games this season. They have a bottom tier offense to go with one of the worst pitching staffs in the bigs. It’s going to be another long year on the South side.

What has happened to the Tigers? They were a consistent contender in the early half of this decade but have completely went off the rails the past couple of seasons. The Tigers finished just 64-98 last season after finishing 64-98 as well in 2017. The offense finished 26th in the majors in runs and 28th in home runs last season. It wasn’t any better for the pitching staff as they ended up 23rd in the majors in ERA. Tigers slugger Miguel Cabrera only played 30 games last season so hopefully he can stay healthy and at least make the Tigers interesting to watch.

It takes an awful team to be worse than the White Sox and Tigers but the Royals have somehow found a way to do it. Kansas City finished a woeful 58-101 last season and that was a huge 22 win drop from the prior season when they finished 80-82. The Royals had a terrible pitching staff to thank for that as they had the MLB’s 29th worse ERA at 4.94 last season. Don’t expect much to change this season especially when Danny Duffy and Ian Kennedy are your projected 1st and 2nd starters. Woof!